Is it called the pinkie finger or the little finger? Many patients want to use the right technical terms when talking with their doctor, and this can improve the efficiency of your office visit. Here I’ll show you how to accurately discuss where your hand problem is by teaching you some hand surface anatomy.

Not every hand surgeon uses the same words to describe hand anatomy and upper extremity (hand and arm) problems. Many surgeons have their own particular and preferential ways of describing normal anatomy and disease processes. However, there are some pretty consistent terms, labels, and concepts that you should know when discussing your problem with a hand specialist.

In this series of articles, I’ll go through some of these terms along with some helpful diagrams and shed some light on the common language of hand and arm surgery. 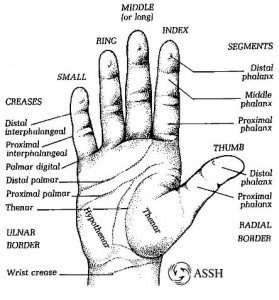 The names of the fingers are as follows:

Each finger has three main segments:

The two terms distal and proximal mean “towards the tip” and “towards the body”, respectively. You can apply this terminology to other parts of the body, like the foot (the toes are distal to the ankle, or the knee is proximal to the toenail).

The thumb has only two segments:

Read more about the three joints of the thumb.

Between each of the segments of the thumb and fingers is a joint. As we develop, the bending of our joints creates skin creases on the palm side. These creases have names you can see in the image.

The crease between the distal phalanx and middle phalanx segments is called the distal interphalangeal (DIP) crease because it’s the most distal of the finger creases (out towards the tip).

The next crease in line as you move away from the fingernail and towards the wrist is the proximal interphalangeal (PIP) crease, between the middle and proximal phalanx segments.

The palm creases are named as follows, starting distally and working proximally (toward the wrist):

The major crease at the wrist on the palm side is simply called the wrist flexion crease. It’s formed as the wrist joint bends into a flexed position.

Another critical pair of terms used when describing sides of the hand (or even wrist and forearm) is radial and ulnar. These terms are named after the radius and ulna bones in the forearm; the two long bones of the forearm, between the elbow and the wrist.

Relationship of deep anatomy to skin creases of the hand

Hand surgeons often describe an injury or problem as being on the ulnar side or radial side of the hand. If you have symptoms isolated on one side or the other, this can be valuable information that leads to a correct diagnosis.

Thenar and hypothenar are two terms that describe the fleshy mass of skin, fat, and muscle on the thumb side (radial) and the small finger side (ulnar) of the hand.

Here is a video version where you can see me point out the anatomy of the hand surface.

The best way to picture the usefulness of these names and labeling conventions is to imagine yourself describing a cut on your hand to a hand specialist on the phone. An accurate description could mean the difference between urgent surgery and treatment with a couple of butterfly tapes or Band-Aids. 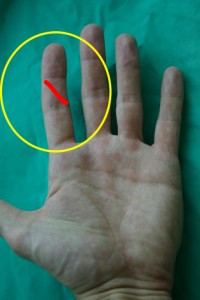 If the red line in the image is a laceration, using your new knowledge of hand terminology, you should describe the cut in the following way:

I cut myself with a knife! It’s kind of an angled cut about an inch long on the palm side of my left hand. The cut is between the DIP and PIP creases on my index finger.

If I heard that description over the phone, I’d know almost everything necessary to recommend treatment with the exception of a few clarifying questions.

Do you think your familiarity with hand surface anatomy and terminology would help streamline your visit with a hand specialist? Of course!

See how powerful “knowing the language” can be?