You may have noticed that former White House Chief of Staff Rahm Emanuel’s right middle finger is missing. What happened? 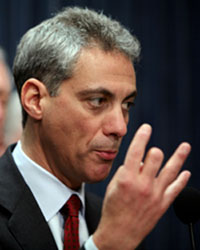 Rahm Emanuel injured the tip of his right middle finger during a beef slicing incident at Arby’s when he was 17. His finger became infected after he swam in the lake soon after the injury. The distal part of the finger was amputated in surgery.

Apparently he developed a bone infection during treatment and was in the intensive care unit at one point with a blood infection.

He jokes about it and President Obama ribs him about it now, but at the time, the injury could have cost Rahm his life.

I see smashed fingers many times a year – sometimes so badly damaged that surgery and partial amputation is necessary.

If you know of another hand or arm condition in the movies or on TV, let me know in the Comments!