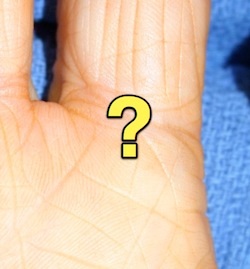 Many patients ask where I put the incision for a trigger finger surgery. Knowing where the scar will be is an important part of getting ready for this procedure.

Find out where I make a trigger finger incision in this short article. I’ve included some pictures and a video to make things clear.

Trigger finger is a common problem involving the flexor tendons of the fingers and thumb. See this simple trigger finger drawing I use in the office all the time to illustrate the problem.

When the thickening and inflammation in the tendon lining are causing pain and locking that isn’t cured by steroid injection, it’s time to consider surgery for trigger finger.

Surgery is the final step in management of this problem, after other things have stopped working.

Surgery for trigger finger (also called stenosing tenosynovitis) involves releasing the tight band of tissue called the A1 pulley, which frees up the tendon and lets it glide smoothly through the sheath.

Where is the incision made?

Several incisions for this surgery have been described over the decades, but I use a longitudinal incision, in line with the finger. 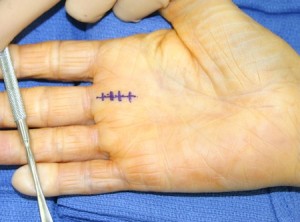 The incision is made right over the A1 pulley area of the palm, right between two major creases of the hand.

This incision for trigger finger surgery can be closed with absorbable or non-absorbable sutures.

Advantages of this style of trigger finger incision

I believe this style of incision creates less wound tension and a smaller scar. The longitudinal incision is made between the nerves, so it’s generally a safer approach to the tendon sheath. In the rare event of an infection, it’s pretty easy to extend this incision to wash out the infection.

Any time you’re considering surgical treatment – ask your surgeon where the incision will be!