The most common type of wrist arthritis creates pain at the thumb, or radial side of the wrist. Pain can flare up and down, with good days and bad days. Sometimes a wrist brace, anti-inflammatory pills, heat or ice can help. Hand surgeons can help with occasional cortisone (steroid) shots in the joint.

When all these treatments fail (or when you’re just sick of them), surgery is a good option. All these other treatments just deal with the symptoms.

Surgery is the only way to get rid of the arthritis forever.

Both surgeries stop the arthritis pain because the worst and most painful carpal bone, the scaphoid, is completely removed. Unfortunately, just taking out this bone isn’t good enough. Something else has to be done to prevent the rest of the wrist from becoming arthritic.

In the PRC procedure, the scaphoid, lunate, and triquetrum bones are removed. These three bones form the “proximal carpal row”, basically a row of three bones close to the radius and ulna (where the forearm bones join with the tiny wrist bones).

This leaves a big space, obviously, but it’s filled in as the distal row of carpal bones sinks into the space, forming a new joint. This surgery takes about six weeks to recover from. You’re in a temporary splint for 10 days, then into a cast for 3 weeks. Then you start some gentle motion and maybe visit the hand therapist a few times.

In the partial wrist fusion surgery, after the scaphoid bone is removed, instead of taking out more bones, I fuse together four of the remaining carpal bones: the lunate, triquetrum, capitate, and hamate. A fusion means forcing the bones to grow together into a solid, stable mass of bone.

A wrist fusion requires hardware – this could be anything from simple stainless steel wires to special staples, to a small plate and screws. Most of the time I use a plate and screws. The fused bones take about six weeks to heal solid. During that time, you’re in a cast with your fingers free, but can’t lift or grip anything. You may need some therapy afterwards to get the wrist moving again.

Deciding which is best

PRC versus partial wrist fusion is controversial. Most of the research that tries to study which one is better tells us that they’re equal. Both are pretty good at stopping pain. Both options let patients function very well after surgery.

My advice is to have the least complicated surgery that stops the pain. For most people, that’s a PRC. No hardware to worry about; no fusion to heal, and a slightly faster recovery time.

The advantage of a partial wrist fusion is mostly theoretical, in my opinion. It leaves more of your natural anatomy in place than a PRC. But with higher risk of complication (the fusion not healing or having to take hardware out later). Some surgeons believe that a PRC weakens the grip, but there’s no good science to tell us that for sure. 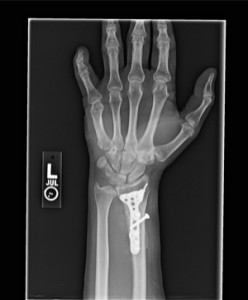 Patients often ask, “Will the plate have to be taken out?” during our discussions about fixing bad wrist fractures or fractures in other parts of the hand and arm. Some patients ask this after a successful surgery when the bone is healed.