Parents of a Massachusetts fourth grader, Ally Deon, are furious after officials at her school failed to call an ambulance when she broke her arm on the playground.

Here’s a link to the video of the news story from WCVB.com: 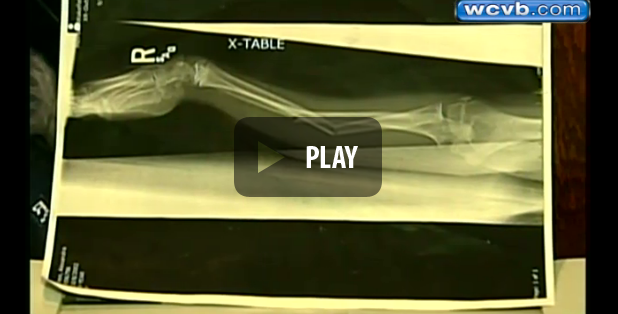 Apparently Ally’s mom took her to a local ER, where Ally was evaluated and transferred to Boston Children’s Hospital for treatment about 15 miles away.

All I’ve seen is the videos of Ally’s cast and some of the x-rays.

This looks like a radius and ulna fracture with angulation (bending deformity).

These fractures may or may not need surgery, depending on if the bone came through the skin or if the arm can be straightened out in the emergency room with some sedation. This procedure might be done by an ER doctor or an orthopedic surgeon.

After the bones are straightened, the doctors usually put the arm in a temporary splint, take x-rays to see if the bones are in a better position, and send the child to the orthopedic surgeon for repeat x-rays the next week.

Sometimes a colored cast is put on in the ER, but more commonly a plaster or fiberglass splint is used.

I can tell you from the videos of Ally’s arm that the curve of the cast means her bones are likely in a good position.

Boston Children’s Hospital is known as one of the best places for children’s orthopaedic surgery in the country, if not the world.

What should parents do?

I see a lot of kids in the ER and straighten lots of broken bones like Ally’s. Most parents in my experience do not call 911; they drive their child to the ER themselves.

However, this obviously can’t happen when the child falls at school, and those minutes between the injury and getting treatment for the child are hair-raising for parents.

Any organization with a playground should have a clear policy on what to do in the face of a deformed child’s broken arm.

Parents also have an obligation to know what the policies are and the consequences of those policies, for example:

Make sure you know what the policy is at your child’s school. Review it and meet with school officials if necessary for clarification.

Another tip is to find out from your local ER (where your child would likely be transferred) if an orthopedic surgeon is on call there, and whether children’s fractures are routinely transferred to other more specialized hospitals, as happened in this case.

In defense of the parents

Regardless of the school policy, a deformed, broken child’s arm can be very simple or very complex and needs to be seen by a physician as soon as possible.

Other injuries are also possible to neck, head, or leg. If there’s any doubt, the child shouldn’t be moved and an ambulance called immediately.

Imagine the liability of making the wrong choice here.

I don’t know what the majority of school policies are on this, but I’d be surprised if most schools don’t call 911 at the same time they’re calling parents.

Hopefully this case will be a wake-up call for parents to stay involved and alert to these school policy issues.

Post any questions, comments or other good links for parents in the comments below!