The choice of anesthesia is a choice we make together as surgeon and patient in the office. Unfortunately, one important person is missing from the decision process on the day you see me in the office and you decide to have surgery: the anesthesia provider (nurse or doctor). Sometimes a pre-op visit can be arranged with that person before surgery if necessary. 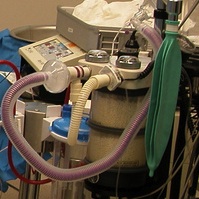 Many upper extremity surgeries can be performed without your having to go all the way under (general anesthesia). The more distal the surgical site (read about hand anatomy terms here), the more likely the surgery can be done with some local anesthesia (like Novacaine).

Nerve blocks (numbing up a nerve that supplies the hand) are the most common method used to operate on the hand and arm without general anesthesia. The nerves can be anesthetized at one of several levels in the arm – from the armpit to the base of the finger.

The majority of my patients have an IV inserted in the opposite hand or forearm so they can have some sedation during the nerve block and during the surgery. If you don’t have the IV, the only sedative you can take is a pill, which may not be as effective as sedation through an IV.

Whether you’re awake or asleep during the surgery after the nerve block depends on several factors:

For longer surgeries or surgeries in an area that is difficult to anesthetize with a nerve block, general anesthesia may be a good option. In most cases, a soft tube is placed in the back of the patient’s throat that allows the anesthesia provider to control the airway. Usually the patient is breathing on their own, depending on the types of medications that need to be given.

Problems with nausea after general anesthetic still plague some patients but it’s not as common as it used to be.