Why do orthopaedic surgeons order so many MRIs? Aren’t x-rays good enough? What’s the difference between an MRI scan and an x-ray? 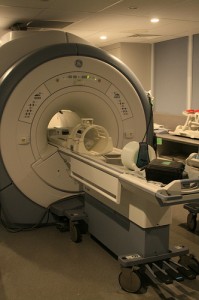 “It was not an issue before we went on the bye,” Vikings coach Brad Childress said of Favre’s elbow, which first appeared on the injury report before the Sept. 26 game against Detroit.

“We worked pretty good on Monday and Tuesday out here. It flares up every now and again. MRI just says he has a little inflammation. You manage it.”

MRI stands for magnetic resonance imaging. An MRI scan is a detailed way of looking at the inside of the body. Doctors usually order MRI scans to look at things that standard x-rays do not give enough information about. They can be used to diagnose or monitor problems in the human body.

Difference between x-ray and MRI

An x-ray (also called a radiograph) is a digital or film image created by shooting a small dose of radiation through a part of the body. It takes only a few seconds to have an x-ray.

An MRI scanner uses no radiation to create a useful image. Images are made by applying a strong magnetic field to the patient’s body and using a computer to analyze how water molecules in the body respond to those magnetic forces. Most MRIs take about 45 minutes to an hour.

If a part of the body doesn’t contain bone or something with calcium in it, you won’t see it very well on an x-ray. Soft tissue parts like muscle and skin show up as a gray shadow on plain x-ray.

The harder or more calcified something is, the better it shows up on x-rays – therefore, x-rays are very useful for looking at the shapes and positions of the bones of the human body.

MRI, on the other hand, is better in most cases for looking at soft tissue parts that contain more water than hard substances like bone. We all have some level of water in our bones, so they do show up on MRI scans, but not as well as soft parts.

The most common reason MRIs are ordered is to look with more detail at the soft parts of the arms, legs, or spine. Some examples of things that we can look closely at with MRI include:

Many tumors are best evaluated on MRI since they are mostly made of soft tissue.

For example, since ganglion cysts are filled with clear fluid, they show up very obviously on MRI scans since there’s lots of water in that fluid.

Since MRI scans depend on the water or fluid content in the body tissue, you can see swelling and inflammation on these images.

For instance, tendonitis will show up on an MR scan because there’s usually fluid and swelling that goes along with it.

Some high points and facts about MRI

Do you need an MRI?

Most orthopaedic problems can be diagnosed by an orthopaedic surgeon without MRI. Usually plain x-rays, history and physical exam are all that is necessary to make an accurate diagnosis.

One of the best reasons to get a magnetic resonance scan is that the surgeon may use it as a kind of map for surgery.

For example, an MRI may show that a tumor is wrapped around an important nerve or blood vessel, which would be important information for the surgeon.

If your doctor wants to order an MRI, ask the following questions:

MR scans are performed in a machine where the patient lies down in a narrow tube. Some patients get anxious in this situation.

Being absolutely still during the scan is critical for a good diagnosis. If the image quality is messed up because you move during the MRI, the images may be useless.

Sometimes a mild sedative will help during the imaging procedure. Ask your doctor about this.

One solution is to have an MRI scan in an “open MRI” machine. This sounds great to patients who are anxious about being in a small tube (in a “closed MRI), but there is a major disadvantage to doing this:

Open MRI scans usually don’t give enough fine detail for an accurate diagnosis in most situations. The smaller the body part (for example, in the finger), the more critical the image quality is.

If you think you might want a scan in an open scanner, ask the ordering physician if the image quality will be good enough for an accurate diagnosis.

All MRI scans are not created equal

These are only a few of the details to consider when getting an MRI scan. Orthopaedic surgeons trust particular radiologists and particular imaging facilities. If a surgeon works closely with a particular MRI technician or radiology team, he may not trust images obtained at another facility. Therefore, don’t be surprised if your doctor is particular about where you get the scan.