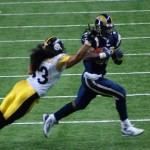 How can Rams running back Steven Jackson play against the Carolina Panthers if he just had surgery this week (Monday)?

I don’t know which particular bone was fractured in Steven’s ring finger. It could be one of the following:

For purposes of discussion, I’ll assume this is a break in his proximal phalanx; the first bone in the finger moving out from the hand. 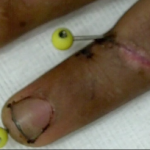 Pinning fingers is a good method of stabilizing broken bones. Finger bones heal in about six weeks. Pins are usually taken out after four weeks.

Depending on where the pins are placed, the patient can start moving the finger right away to prevent stiffness in the joints around the broken bone.

To explain how an athlete could play with pins in a fractured finger, it’s helpful to talk about what pins do for a broken finger.

The function of pins

Pins don’t line up the fracture; the surgeon lines up the pieces and then makes them stay in the correct position by putting pins across the two broken pieces of bone. The pins just work as a kind of internal strut or piece of rebar that reinforces the bone while it heals. Once the bone is healed around the pin, the pins can be taken out. 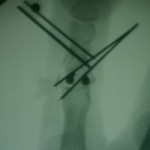 Every athlete who plays with a fresh injury takes a risk. Here are some possible risks Steven is taking by playing this soon:

Remember, the pins are the only strong part of a fractured finger that was just pinned. That’s why he’ll have to wear some sort of splint or protective device when he plays – it just provides more protection for the bone in addition to the pins.

The worst case scenario would be a re-breaking of the bone or worsening of the fracture. This may require more surgery and more time out of competition.

You can’t protect yourself as effectively with your hand if it’s injured – you have a tendency to favor that hand. You might be less willing to land directly on the hand if it’s freshly injured or operated on. Instead of hitting the ground with your hand, you might hit with your elbow or land on your shoulder, creating another injury.