Many operations have been designed over the last 100 years to treat this type of arthritis. They all have one thing in common: removing a bone called the trapezium, which is covered with arthritis.

Taking out the trapezium leaves a hole, an empty space with bones, tendon, and muscle all around it. Most of the videos on YouTube show the surgeon taking a tendon from the forearm (usually the FCR – flexor carpi radialis), rolling it up, and putting it in this space to form a cushion for the remaining bones. This is commonly known as an “LRTI” thumb surgery, which stands for ligament reconstruction tendon interposition.

I used to do this operation as well, but after a few years found a simpler way to accomplish the same thing, save the FCR tendon, and with lower risk of complications for patients.

In the current version of this surgery, which I’ve used since about 2011, I only work through the original incision. No extra tendon is harvested or rolled up.

Steps of the Operation

In this drawing, I show the internal anatomy of the thumb from a side view – as if you just rested the back of your left hand on the table in front of you and looked at the thumb from the side, pointing your fingers to your right.

The thumb has three bones. Naming them from the tip toward the wrist, they’re called distal phalanx, proximal phalanx, and metacarpal.

The metacarpal base joins up with the trapezium – that’s where the worst thumb arthritis is in most people. This is where most people see a big bony lump at the base of their thumb. The next bone back towards the wrist is the scaphoid (skay-foid) bone.

I make the incision directly over the trapezium bone, on the top side of the thumb. When I take out the trapezium, as mentioned above, the space that’s left is between the thumb metacarpal bone and the scaphoid bone. 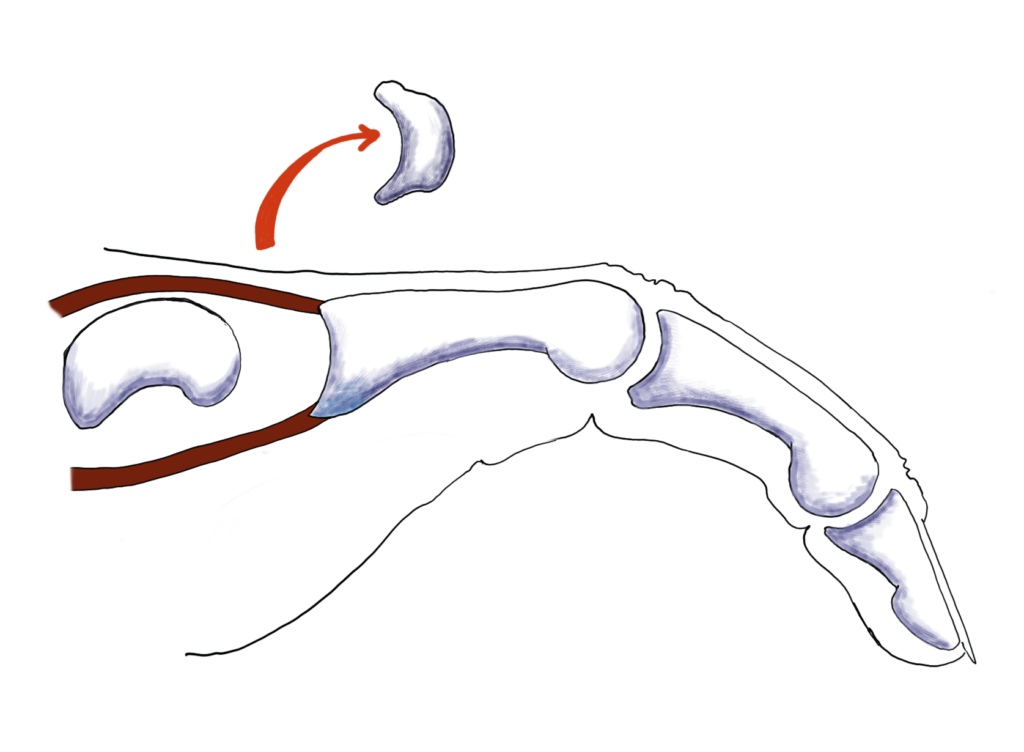 The next step in the surgery is to “pinch” those two tendons closer together with a strong suture. This forms a cushion where the metacarpal can glide smoothly when everything is healed up. It also pulls the base of the metacarpal down from its “kicked up” position (reducing the big bony lump most people have).

This is the part that has to heal for a solid four weeks after the surgery. That’s why you can’t use your thumb for a month afterwards.

The surgery takes about 45 minutes from start to finish. Afterwards you’re in a bulky, well-padded dressing and splint from the tip of the thumb all the way up the forearm for ten days. Your elbow and all other fingers are free.

After ten days, you come back to the office and get sutures out, then you’re fitted for a custom thumb splint, which will protect the surgery for another two and a half weeks. Then you’ll finally start getting the thumb loosened up by doing therapy exercises – mostly at home.

Most patients are pinching and gripping by three months on average. Some move faster, some move slower. You should be free of the splint by six weeks after surgery.

For a detailed description of the recovery process and how to prepare for it, click here. This was written by one of my patients who thoughtfully took notes on her experience.